The ousting by the military of Egyptian President Mohammed Morsi must have been unsettling for Turkish Prime Minister Recep Tayyip Erdogan who recently faced similar but much less massive protests over his authoritarian style of government.

The Egyptian press put the number of protesters around the country at 14 million, many more than Turkey’s estimated 2.5 million according to the country’s Interior Ministry. Parallels between the two revolts, however, are not as superficial as might first appear.

Erdogan, like Morsi, espouses a majoritarian world view in which a leader believes electoral might gives him the right to push a particular agenda and to largely ignore the views of the rest of the electorate. This concept is also known as  ‘ballotocracy’.

Morsi gained 51.3% in the 2012 presidential election (in a run-off between two candidates) after the Muslim Brotherhood won 47% of seats in the 2011 parliamentary election (with 37.5% of the vote). Its Islamist rivals, the Salafarist Nour party, gained a further 24% of the vote in the legislative elections.

Erdogan’s Islamist-rooted Justice and Development Party (AKP) captured almost 50% of vote in the 2011 parliamentary election, its third successive victory and with a rising share of the vote (34.3% in 2002 and 46.6% in 2007). Unlike in Egypt, the AKP’s Islamist rivals count for very little.

Both Erdogan and Morsi introduced socially conservative and religiously inspired policies into very heterogeneous societies, which, at its most basic level, polarised their countries between secularists and pious Muslims. This was particularly so of Morsi who quickly became autocratic and placed his supporters in key positions.

Egyptians opposed to Morsi’s creeping Islamisation of the country achieved in their protests, which sparked the coup, what they could not do in the ballot box, setting a dangerous precedent.

In both countries, the press was muzzled (there are reportedly more journalists in prison in Turkey than in any other country, often on dubious terrorism charges related to Kurdish issues), civil liberties were rolled back and Erdogan and Morsi sought to change the constitutions to their own advantage. Erdogan wants to become president with enhanced powers in 2014 when direct elections will be held for the post for the first time.

The Turkish police, unlike those in Egypt who stood by and did not intervene including when the Brotherhood’s headquarters in Cairo were looted and burned, used brutal force to put down the demonstrations.

The heavy-handed response caused the protests, which began peacefully in Gezi Park over plans to build a shopping mall in one of Istanbul’s very few green spaces, to extend around the country and assume many more issues than environmental ones, such as the limits imposed on the sale and promotion of alcohol. Ankara’s reaction also led the European Union to postpone the opening of a new chapter (the first in three years) in Turkey’s snail’s pace accession negotiations. 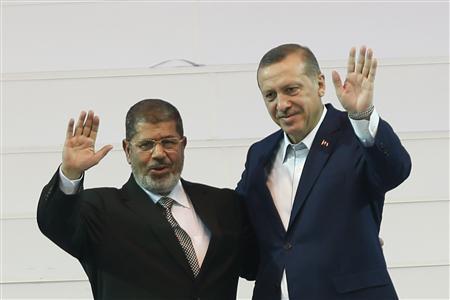 The silence of the Turkish army, the guardians of country’s secular constitution (drawn up in 1982 after the last coup), was deafening unlike in Egypt where generals issued a 48-hour ultimatum calling on Morsi to ‘meet the demands of the people’ baying for his departure and then deposed him.

In both countries, the military are entrenched powers. All the presidents in Egypt between 1952, when Gamel Abdel Nasser overthrew King Farouk, and 1981 when Hosni Mubarak was ousted were military men. Morsi was the first civilian president in Egypt’s history, albeit for only a year.

The Turkish military has staged three coups (1960, 1971 and 1980) and each time returned to the barracks after restoring civilian government. In 1997 generals made their views known on secularism and political Islam in a memorandum branded as a ‘post-modern coup’ which precipitated the resignation of Necmettin Erbakan of the Welfare Party, a precursor of Erdogan’s AKP. In 2007, the army staged an ‘e-coup’ when it posted on its website a statement defending secularism against Islamist incursions after an inconclusive parliamentary vote on electing Abdullah Gül as president. His wife wears a headscarf. Erdogan responded by calling a snap general election and Gül became president (elected by parliament).

Erdogan has reduced the power and influence of the military (the National Security Council, a kind of shadow government, has been turned into a consultative body) in order to meet the European Union’s conditions for opening Turkey’s accession negotiations in 2007.

Like the Muslim Brotherhood, Erdogan’s equally well organised AKP overturned the status quo (in Turkey’s case the Kemalist establishment, which draws its inspiration from Mustafa Kemal Atatürk, the founder of the Republic of Turkey in 1923) and increasingly antagonised secularists.

The risk of a coup in Turkey, along the lines of what happened in Egypt, in response to the ‘popular will’, is very slight. For a start, more than 300 serving and retired officers were sentenced to jail in 2012 for plotting to overthrow Erdogan almost a decade ago. ‘At this rate we will have no officers left to appoint to command positions’, Erdogan said earlier this year. The trial underscored civilian dominance over the one all-powerful military.

The trial discredited the military; it is no longer the most trusted institution, as it was for many years. In contrast, the Egyptian military, upholder of the status quo until it pulled the plug on Mubarak’s 30-year regime in 2011, has become even more popular among secularists as a result of ousting Morsi and imposing an interim government.

Turkey was one of the few countries to openly support the Morsi government to the very end. It was a strategic ally in a region where Erdogan, a popular figure on the streets of Egypt, played an increasing role. Last October, Turkey extended a $1 billion, five-year credit to Egypt for an economy that is in a much worse shape than Turkey’s (a success story in the last decade, though with worrying imbalances) and that did not require repayment for the first three years.

Just as Morsi refused to have any truck with protesters in Tahrir Square so Erdogan has not been not conciliatory towards those in Taksim Square. The protests have died down in Turkey, but there is no sign of a meaningful dialogue between the two sides, many arrests have been made and the rhetoric of Erdogan, a divisive figure, remains confrontational. In Egypt, the Brotherhood has vowed to press for the reinstatement of Morsi. Both countries face periods of uncertainty and political instability, particularly Egypt.

As in Egypt under the Muslim Brotherhood, the opposition to the AKP is ineffectual and divided. The AKP would win a general election if it was called tomorrow, according to opinion polls.

It remains to be seen how the Muslim Brotherhood will fare in Egypt’s next general and presidential elections, assuming they are allowed to run which it should be if an inclusive democracy is to be established. Erdogan, too, needs to be more inclusive. Egypt’s revolt was a warning that there are limits as to how far he can go.

Senior Research Fellow at the Elcano Royal Institute, journalist and writer. Author of the Elcano's monthly news review Inside Spain and of four books on Spain published by the Institute. William Chislett website | @WilliamChislet3

This site uses Akismet to reduce spam. Learn how your comment data is processed.